Social Marketing – Are You Spending Your Time In The Right Places? 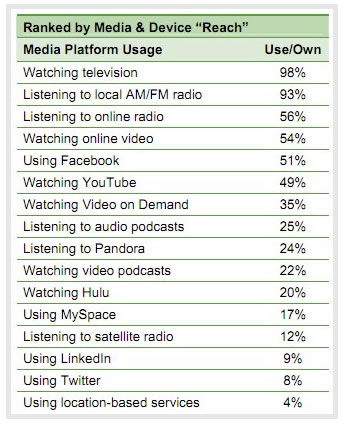 The world is a buzz with the networking site Twitter. Yet is that the place where you should spend your time?

Just like any other marketing tool, Twitter will only work if that’s where your prospective clients are.

Today I was reading through a new report put out by Edison Research and Arbitron, The Infinite Dial 2011: Navigating Digital Platforms, and noticed some interesting things.

Right now, Facebook has reached majority, meaning that more than half of the US population now uses Facebook on a regular basis. In less than 3 years, it has grown from an 8 percent to a 51 percent usage. So if you are trying to reach the average consumer here in America, its pretty safe to say that you can do so through Facebook.

One in five Americans report that they have visited social networking sites several times per day. And one in four users state that they are following brands or companies in addition to their online friends.

It’s hard to ignore those facts. And it’s hard to run a company, and not know Facebook is the place to be to reach out to target marketplaces.

This same report states that while 92 percent of Americans have heard of Twitter, only 8 percent say they have ever used it.

One of the biggest reasons I think the gap between those who have heard it and those who have actually used it is so high is because Twitter takes a bit more to understand.

When I mention Twitter to a room full of people, I will undoubtedly get the question “Why do people care what I eat for lunch?” The common misnomer about Twitter is you report what you are doing. Twitter is more than that; it’s about communicating, building relationships, and building your expertise.

But if your client base doesn’t get it, no matter how much you Tweet, you’ll never reach them.

1. Start by finding out where your clients are.

2. Look towards the future. If statistics show on social platform growing, put your time into that platform.

3. Watch your results. If you see action, keep it up.

4. Try new things. Just because statistics show something is falling off doesn’t mean its not right for you. If you have the time, try it. Then monitor your results, and continue doing what works for you.